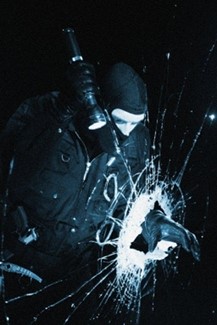 In matters of burglary protection of objects, the following ground rule is applicable: basic mechanical security has priority over electronic warning systems. Only a sound mechanical barrier is able to set a massive time delay and a high level of resistance against a burglar. For this reason, mechanical security can only be enhanced through electronic systems, it can never be replaced. Burglar-proof Security Glass ensures the highest level of mechanical protection and is therefore especially suitable for the glazing of private homes as well as particularly endangered objects, such as art galleries, museums, banks, embassies and jewellery shops. 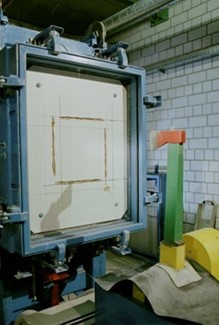 The European standard EN 356 regulates the testing procedure for the evaluation of burglar-proof glazing. For burglary testing, an axe is fastened into a machine.
The objective is to strike an opening of 40 x 40 cm into the tested sheet. The axe is mechanically handled and strikes precisely to the millimetre and with defined force. The number of strikes that are needed to produce the designated opening then define the resistance class.

In accordance with the European Norm EN 356 Anti vandalism: proof against repeated beating or smashing with hard objects. Testing methodology: a spherical ball made of tempered steel, weighing 4050 gr is dropped three times on the sample, without giving it any original impetus. The impacts of the 3 projectiles results in an equilateral triangle, the sides being 130 mm wide.


In accordance with the project of de European Norm EN 356